The Marine Megafauna Foundation (MMF) has been working in the Vilanculos region for over 10 years and officially began collaborating with The Sanctuary in 2020, when new management took over with a keen interest to expand conservation work in the marine realm. As a research and conservation organization, MMF’s aim is to collect vital scientific data on threatened species of marine megafauna that can be used to inform science-based management strategies to better conserve and protect vulnerable marine species along the Mozambican coastline.

Throughout 2020/21, MMF scientists conducted a total of 155 survey dives in the Vilanculos wildlife sanctuary and surrounding waters (72 in 2020, 73 in Jan-June 2021). During these survey dives and boat-based monitoring, they recorded >23 species of elasmobranchs (sharks and rays), 4 species of sea turtle, 4 species of cetaceans, as well as billfish such as sailfish and marlin, and large teleosts like brindle bass and potato grouper – exhibiting the diversity of marine species that can be found throughout Sanctuary waters.

Both species of manta ray are encountered in Sanctuary waters, usually cleaning on the deeper reefs or feeding on zooplankton in nearshore surface waters. Reef manta rays are more commonly sighted and researchers identified 28 individuals in 2020 and 40 so far in 2021. Giant manta ray sightings are rare in this region; however 2 giant mantas have been sighted in July 2021 – one at a deep reef cleaning station and the other surface feeding with reef manta rays in the waters east of Nyati. 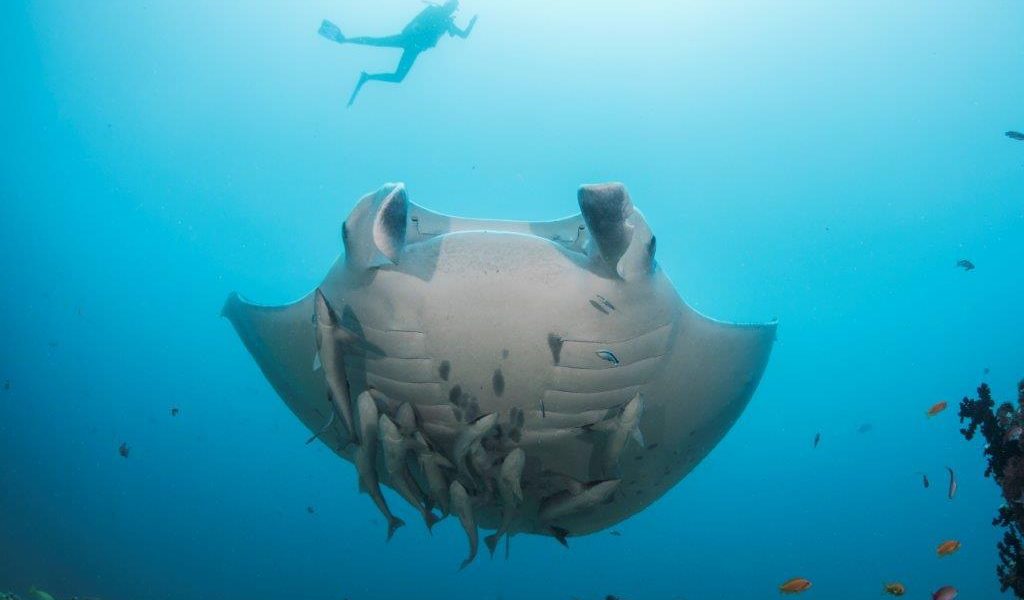 Unfortunately, whale shark sightings have declined in the region over recent years. However, in July 2021 the first whale sharks seen in over 2 years were sighted in Sanctuary waters and identified by MMF scientists, both were juvenile males. 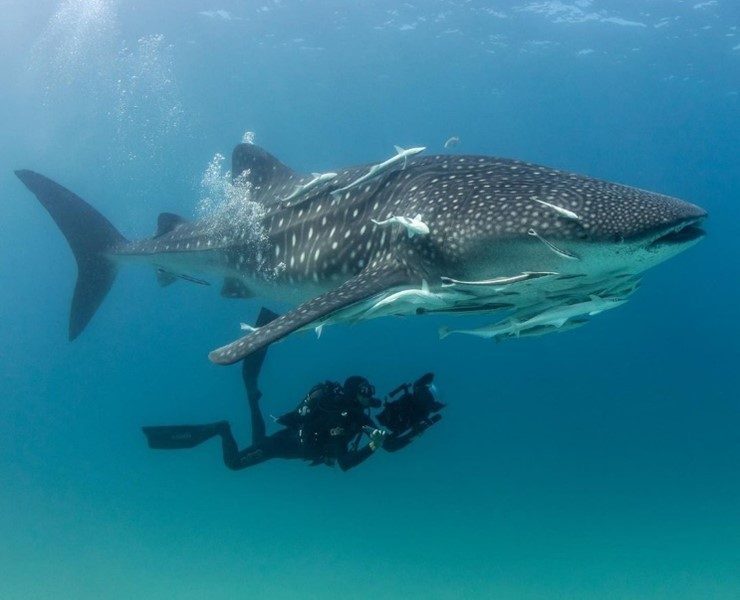 As part of an ongoing tagging program, 3 female bull sharks, 3 blacktip sharks and 1 scalloped hammerhead shark were tagged with internal acoustic tags in December 2020 at first and second pinnacle dive sites by MMF researchers, in collaboration with researchers from the Oceanographic Research Institute (ORI), South Africa. These sharks are being monitored by an array of acoustic receivers that stretches from the northern Bazaruto Archipelago to Ponta do Ouro in southern Mozambique.

Seven of these acoustic receivers are located within the boundaries of the sanctuary (8 if we include Linene) and preliminary data indicate that a number of sharks are highly resident to the montired reefs, which likely represent important habitat for these species.

Wedgefish and giant guitarfish, collectively known as “rhino rays” are among the most threatened groups of marine species. Unfortunately, these species are threatened by overfishing worldwide and are highly sought after for their large dorsal and pectoral fins, and also caught as by-catch in other fisheries.

Rhino rays are rare and very little is known about their biology and ecology, which poses a challenge when designing management and protection plans. At least two different species of wedgefish have been recorded by MMF at deep reefs and shallow sandy habitats in the Sanctuary. Researchers have identified important aggregation sites for critically endangered bottlenose wedgefish and a potential nursery area for the species, all within sanctuary waters.

In order to better understand wedgefish and gather information on their habitat use, movement patterns and baseline numbers, MMF has begun a focused wedgefish research project in 2020 with primary study sites located in the sanctuary. MMF scientists have been monitoring individuals by collecting identification photos of their dorsal spot patterns. They are building a photo-ID database and have identified 40 individuals (and counting) in the Bazaruto and San Sebastian region, with the aim to assess whether natural markings are stable enough over time to use for individual identification and non-invasive population monitoring.

In 2021, the team (with the help of Sanctuary managers) tagged three bottlenose wedgefish, all with internal acoustic tags and two with miniPAT satellite tags. To our knowledge these are the first satellite tags to be placed on this species in southern Africa. One external acoustic tag was also placed on a bowmouth guitarshark, again the first known tag deployment on this species in Africa. MMF has an additional 16 internal tags and 1 miniPAT satellite tag to deploy on wedgefish in the coming months. 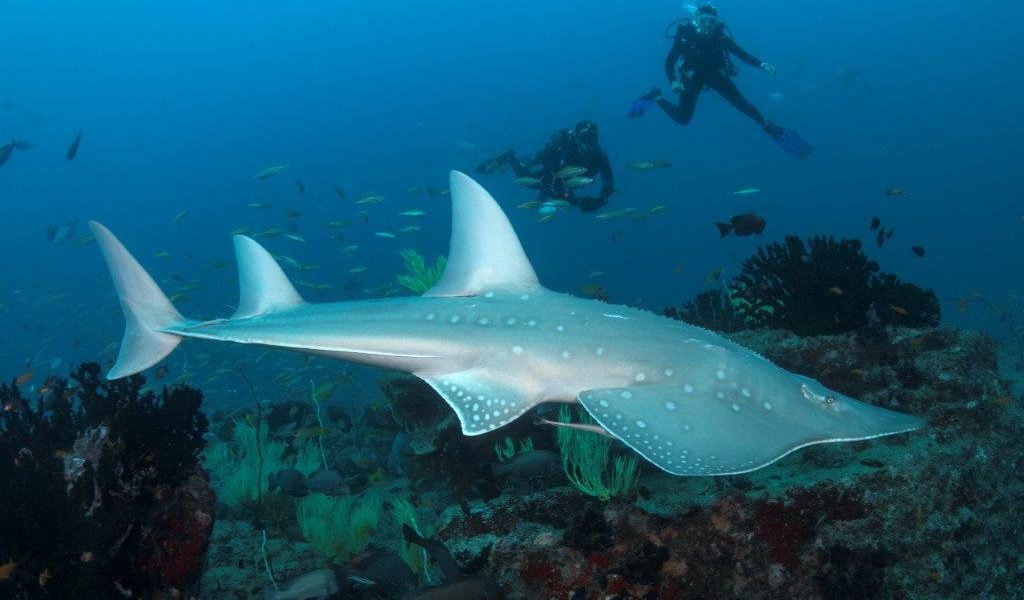 Seawater contains environmental DNA (eDNA) which originates from skin cells or mucus of organisms that are present in the water body. The analysis of eDNA from water samples for biodiversity assessments is an emerging, yet promising, technique that enables the detection of mobile species without direct observation. The ability to identify distinct species in water samples using eDNA techniques enables researchers to gather information about multiple species from small samples of seawater.

In order to investigate the presence and distribution of marine megafauna species throughout Sanctuary waters, MMF researchers have collected >50 water samples in 2020/21 from a range of habitats including deep reefs in the open ocean, shallow sandy regions and deep into the mangrove channels. These samples will be analyzed to assess which species can be detected in the different habitats to better understand species diversity, habitat preferences and distribution.