The latest bird census compiled in 2017 indicates a total of 300 species of birds recorded on The Sanctuary of which nineteen of the species are Red Data-listed, three are vulnerable and 11 are near-threatened, besides a whole host being endemic to Miombo brachystegia woodland typical of The Sanctuary. Please find attached the new bird checklist.

Earlier in the year a pair of Red-billed Oxpeckers were spotted on The Sanctuary, the first ever reported along the coastline. They’ve been subsequently seen and there is hope they will begin breeding this summer. Other new species of importance and interest are:
Lesser Frigatebird (single female seen in March in Palmerhina Bay)
Several colonies of Olive Bee-eaters, the second only largest breeding occurrence in Africa, breed in open sandbanks near the office during spring; the Southern-banded Snake Eagle, a near-threatened raptor can often be spotted along the estuary or on the eastern Ocean View road. The endangered Plain-backed Sunbird can regularly be heard in the tangled moist dune forest on the eastern Ocean View road. A small group of Pink-backed Pelicans, the only pelican species to roost in trees, can almost always be seen in the outermost mangroves at Pelican Bay. The Msasa dominated woodland of the Sanctuary is fairly homogenous and thus species poor, but once in the more mature Miombo woodland, Dune Forest, community open ground and the magnificent freshwater wetlands, interesting and ‘iconic’ species can be seen.

Please report your unusual sightings or records to sanctuarymanager@mozsanctuary.com or christine@everard.co.za 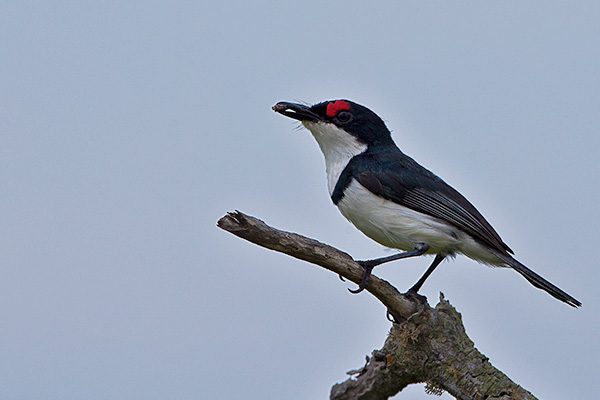